It appears that the PTI government is finally making good (in part) on it’s promise to provide cheap housing for the low income base. Though different from the plan announced originally, the decision seems to be in the right direction. Via a public private initiative involving State Bank of Pakistan (SBP) & number of other public & private banks, the target is set at providing easy finance for 10 million new housing units.

After assuming power in 2018, the PTI government announced its plan to build 5 million new housing units to be given to low income consumers at either very low prices or completely free. The announcement was met with considerable criticism due to its obvious limitations. However, the plan was later changed wherein the government will not itself build the houses, it will instead provide easy loans at affordable interest rates to the consumers who will be able to build the houses themselves or buy them.

Lets try to understand some basics of how this plan would work. Government has allocated Rs. 30 billion which will be used to create a credit line for commercial banks at one percent cost of capital. The banks will, in turn, extend loans to consumers with interest rates fixed for 2 separate windows of 5 years. After completion of these two windows, the interest will be charged at a prevailing variable Karachi Interbabk Offer Rate (KIBOR) plus a spread. The spread will vary for different tiers & amounts the consumers draw in loans. Offering fixed interest rates for two terms of 5 years each will help consumers better manage their finances without having to worry about any variation in interest rates & will give them ample time to prepare for when the KIBOR is implemented. A brief look at the KIBOR trends will show how significant the variations can be even in a matter of weeks. For instance, 6 months KIBOR was over 13% during March 2020 & dropped to 7.5% in April 2020. That phenomenon is not new or unique in an economy like Pakistan. In fact, it happens every two to three years often imitating a cycle trend.

As per policy, the applicant must be a Pakistani national possessing a valid ID card. Following are the four tiers of loans with total amount caps, covered area limits & their respective interest rates:

Tier 0: Maximum amount of Rs. 2 million can be borrowed through microfinance banks exclusively. Interest rate for first five years will be 5% and 7% for the next. Area limit will be 125 sq yd for house & 1250 sq ft for flat.

Tier 1: Exclusively available for the Naya Pakistan Housing & Developing Authority (NAPHDA). Maximum loan limit will be Rs. 2.7 million with a Rs. 3.5 million cap on the total price of housing limit. Interest rate for first 5 years will be 3% & 5% for the next. This category is aimed at providing the cheapest interest rates of all. Area limit will be 125 sq yd for house & 850 for flat.

Tier 3: With a maximum loan limit of Rs. 6 million, interest rate for first five years will be 5% while 7% for the next five years. There will be no upper limit on the total price of housing unit. Area limit will be 125 sq yd (5 marla) for house & 1250 sq ft for flat. A temporary relaxation until March 2023 will be available wherein the unit does not necessarily have to be a new construction.

A directive from SBP mandates that the banks dedicate at least 5% of all their lending in housing sector. Many consumers have reported the swiftness of process & the ease with which they were able to secure the loan. The process may take as little as two weeks before a loan is approved for the consumers showing the public private effort in this regard actully moving forward.

The overall initiative is certainly a nudge in the right direction, however, the plan sways considerably from what was promised at the beginning of government’s tenure. While the original promise was to provide free or very low price housing to poor, most people in that category will see it beyond their reach esp. when the prices of real estate have gone considerably up thanks (in part) to the government’s initiative driven demand. 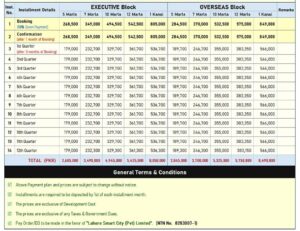